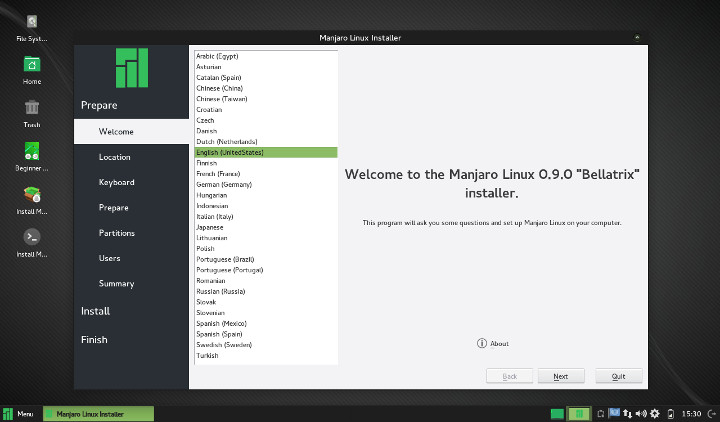 Some of you might already noticed that some of our developers started in September last year to work on our next release series we call Bellatrix (0.9.0). With this series we switch over to a more modern graphical installer framework called Calamares.

The new, Qt5/python3 based installer is a joint effort of several distributions. In May 2014, developers of Netrunnner, KaOS and Manjaro got together to discuss the possibility to work jointly on a brand new, Qt5 based installer. The idea was born to create Calamares. By June the coding started and by September a first, raw usable version was put into testing for XFCE based ISOs. Currently, Calamares is being developed with contributions from BBQLinux, Fedora, KaOS, Kubuntu, Manjaro, Maui and Netrunner.

Calamares is an installer framework, entirely modular. Being that modular shows on this ISO, since it uses about 10 % of the modules that are Manjaro specific, but all stays entirely integrated. Please understand though, Calamares is not at a stable version yet, it is at beta stage, and certain parts are not implemented yet.

Beside the new installer we updated Pacman to 4.2 series. To match libalpm changes we introduced Pamac 2.1 series. It took us some weeks and effort to make it a smooth transition.

This release comes with XFCE 4.11 series, linux318 kernel series and all the usual Manjaro and upstream updates. Stable branch was used to create these install medias. Please give us feedback and report any issues with this release.