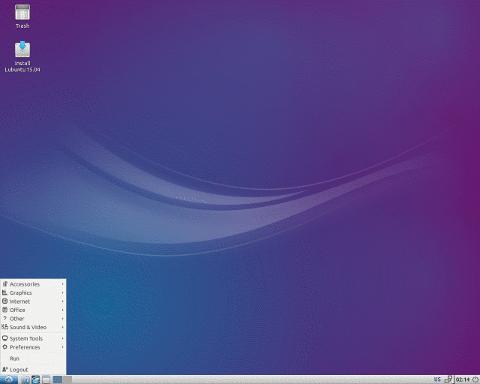 The Lubuntu team is proud to announce the release of Lubuntu 15.04. Please download it here:

Lubuntu is a flavor of Ubuntu based on the Lightweight X11 Desktop Environment (LXDE), as its default GUI. The goal is to provide a very lightweight distribution, with all the advantages of the Ubuntu world (repositories, support, etc.). Lubuntu is targeted at "normal" PC and laptop users running on low-spec hardware. Such users may not know how to use command line tools, and in most cases they just don't have enough resources for all the bells and whistles of the "full-featured" mainstream distributions.

With many LXDE components, Lubuntu also uses well-known applications, such as Firefox, Openbox, Pidgin, to name a few. The Lubuntu project wiki contains more information on the project and the applications used available.

Lubuntu is a good operating system for many old computers, but not for all of them. Some computers have too little horsepower or memory. A rule of thumb is that the computer should not be more than 10 years old.

The minimum specification for CPU is Pentium 4 or Pentium M or AMD K8.

Older processors are too slow and AMD K7 has problems with flash video.

Nvidia, AMD/ATI/Radeon and Intel work out of the box, or the system can be tweaked to work fairly easily. You can get help at the Ubuntu Forums. With such graphics, or if you don't know, try the current Lubuntu version.

Head over here to get it.