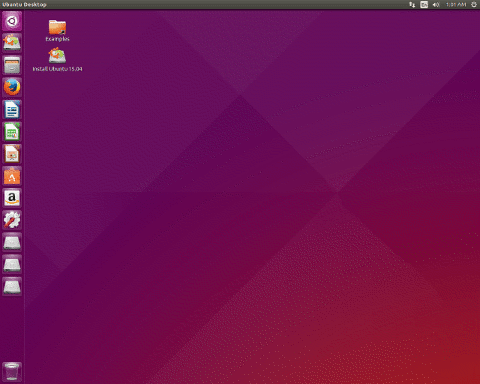 These release notes for Ubuntu 15.04 (Vivid Vervet) provide an overview of the release and document the known issues with Ubuntu 15.04 and its flavors.

Ubuntu 15.04 will be supported for 9 months for Ubuntu Desktop, Ubuntu Server, Ubuntu Core, Kubuntu, Ubuntu Kylin along with all other flavours.

Find the links to release notes for official flavors here.

Images can be downloaded from a location near you.

To upgrade on a desktop system:

To upgrade on a server system:

Note that the server upgrade will use GNU screen and automatically re-attach in case of dropped connection problems.

There are no offline upgrade options for Ubuntu Desktop and Ubuntu Server. Please ensure you have network connectivity to one of the official mirrors or to a locally accessible mirror and follow the instructions above.

As with every new release, packages--applications and software of all kinds--are being updated at a rapid pace. Many of these packages came from an automatic sync from Debian's unstable branch; others have been explicitly pulled in for Ubuntu 15.04.

For servers we see a number of performance related improvements including network send batching and the introduction of the data centre congestion algorithm, as well as the introduction of discard support in Device Mapper raid configurations. There are also improvements to inode locking which should show benefits under heavy load. Netfilter (nftables) continues to evolve gaining facilities for package logging and dumping. A number of filesystems gained minor new features, including btrfs which improved its disk replacement in raid 5 and 6 configurations, and support for scrubbing in those. NFS gained hole punching and preallocation support. Overlayfs finally moved upstream so simplifying its provision in Ubuntu. On the networking side we see the start of routing and switch offload support, and the addition of checksum offload for Generic UDP Encapsulation. Finally we see the introduction of the cutely named foo-over-UDP support, allowing a number of other protocols to nest inside.

On cloud we saw a number of Device Mapper thin storage improvements including performance improvements under high load, and speedier discards in these thin configurations. Xen saw a number of minor fixes. For Hyper-v we see the ext2 filesystem gain freeze support allowing default configurations to be snapshotted. Openvswitch continued to evolve gaining basic MPLS support and Geneve tunnelling.

On the security front we see a slew of improvements in Apparmor as well as improved seccomp support including support for cross thread protection. This release also brings support for signed kexec a key gap in secure boot support.

systemd has replaced Upstart as the standard boot and service manager on all Ubuntu flavors except Touch. At the time of the 15.04 release there are no known major problems which prevent booting. The only service which does not currently start is Juju, which will be fixed in a post-release update soon; all other packaged Ubuntu services are expected to work.

If your system does not boot after installing or upgrading, please file a bug report and tag it with `systemd-boot`. Please see /usr/share/doc/systemd/README.Debian about how to debug early boot or shutdown problems.

You can boot with Upstart once by selecting "Advanced options for Ubuntu" in the GRUB boot menu and starting the "Ubuntu, with Linux ... (upstart)" entry. To switch back permanently, install the upstart-sysv package (this will remove systemd-sysv and ubuntu-standard).

If you use custom or third-party Upstart jobs, you need to write a corresponding systemd service file or SysV init.d script for it. Please see systemd for Upstart users for a comprehensive guide.

The general theme for 15.04 on the desktop is one of bug fixes and incremental quality improvements as well as a more significant change in the move to systemd as an init system.

Unity has had many bugs fixed and new features added. Locally integrated menus are now available for unfocussed windows. There have been a number of usability improvements to the dash.

Most of the Gnome platform is now based on version 3.14. Qt updated to version XX.

Pulseaudio is updated to version 6 paving the way for a move to Bluez5 next release.

LibreOffice 4.4 brings a lot of improvements including improved change tracking in Writer, improve mail merge performance, improved shapes which can now have fully formatted content with tables etc, more statistics functions in Calc, improved OpenGL support for slide transitions in Impress and Draw, password protected documents in Impress. Support for digital signed PDF exports has been added, as has support for connecting to Sharepoint and One Drive. Many new multimedia formats are supported including .ra, .rm, .dv, .ac3, .opus, .asf, and .m4a.

Ubuntu Make continues to add support for new platforms, bringing the total to 15 (from 1 last release). This includes highlights such as:

These new features are also available to LTS users.

We also rationalized 3rd party library managers so that they all behave the same and don't overwrite and/or mix with system libraries. Developers don't have to worry about messing up up their installation if they want to install a pipy, npm, rubygem libraries.

At the point of 15.04 release, all OpenStack projects are at the latest Kilo release candidate for 2015.1 - the final 2015.1 release versions will be delivered as a stable release update post 15.04 release.

Ubuntu 15.04 includes Swift 2.2.2; this is not the final release version of Swift for OpenStack Kilo as this introduced new dependencies to support Erasure coding which it was not possible to support for 15.04 release.

For OpenStack 2015.1, Ubuntu is only tracking the decomposition of Neutron FWaaS, LBaaS and V*NaaS from Neutron core in the Ubuntu archive; we expect to add additional packages for other Neutron ML2 mechanism drivers and plugins early during the Liberty/15.10 development cycle - we'll provide these as backports to OpenStack Kilo users as and when they become available.

OpenStack 2015.1 is also provided via the Ubuntu Cloud Archive for OpenStack Kilo for Ubuntu 14.04 LTS users.

Ubuntu 15.04 also includes the first Ubuntu release of of the Nova Compute driver for LXD ('nova-compute-lxd'). This driver should not be considered ready for production use and is provided for experimentation and early testing at this point in time.

Make sure you read the OpenStack Charm Release Notes for more information about how to deploy Ubuntu OpenStack using Juju.

The LXC container manager was updated to the latest upstream version, 1.1. More specifically the 1.1.2 bugfix release. This brings full systemd support, both on the host and in the container as well as new features such as checkpoint/restore using CRIU, openvswitch support and support for qcow2 backed containers.

More details on the new LXC release can be found at: https://linuxcontainers.org/lxc/news/

This new version of LXC also comes with a new helper filesystem called LXCFS. That filesystem exposes the container resource limits into the container so that tools like free, top, ... report them properly. It's also a vital part of making Systemd work properly in containers.

More details on the new LXCFS release can be found at: https://linuxcontainers.org/lxcfs/news/

CGManager, the LXC CGroup manager was also updated to version 0.36, fixing many bugs and introducing some new features that were needed for LXCFS.

More details on the new CGManager release can be found at: https://linuxcontainers.org/cgmanager/news/

Ubuntu 15.04 is the first Ubuntu release to feature LXD.

LXD has been developped to provide a fast, reliable and scalable way to manage system containers across the network. It's entirely image based, secure by default, supports snapshots, live migration and offers a simple yet powerful REST API.

Ubuntu 15.04 ships with LXD 0.7. This is the result of an intense 6 months of development and while not ready for production workloads, it's definitely ready for experimentation.

More details on LXD can be found at: https://linuxcontainers.org/lxd

Juju, the service orchestration tool for Ubuntu, has been updated to the latest current stable release, 1.20.10. See the upstream release notes for full details of all new features and improvements in this release.

With the switch to systemd, process limits such as the maximum number of open files can now be controlled by tuning the unit configuration file, and MySQL and variant daemons are already limited by systemd defaults. If you are already tuning these values, we recommend that you remove any open_files_limit type configuration settings from my.cnf and configure everything from the systemd unit file instead in order to avoid conflicts between configurations in both locations. See bug 1434758 for details.

Libvirt has been updated to the 1.2.12 release. A profile script has been added to automatically set the default URI on a xen system.

Qemu has been updated to the 2.2 release. The default vga device has been switched to stdvga. If this is an issue, the old default can be explicitly requested using '-vga cirrus'.

Ubuntu 15.04 includes the latest release of Open vSwitch, 2.3.1. For this release DKMS packages are no longer provided as part of Ubuntu as kernels since 3.13 provide sufficiently new in-tree openvswitch modules.

For full details on the Ceph Hammer release, please refer to the upstream release notes.

The release notes describing the features available in docker 1.5 are located here: https://docs.docker.com/v1.5/release-notes/

In addition to the features outlined above, we have provided experimental support for ppc64el and arm64.

Starting with Ubuntu 15.04, i386 AMI's are now deprecated. Users are advised to migrate new workloads to 64-bit HVM instance types. i386 Cloud Images will continue to be published at http://cloud-images.ubuntu.com/releases/vivid/current for the foreseeable future.

‘Snappy’ Ubuntu Core is the smallest and most secure edition of Ubuntu. It is a super-lean, transactionally updated version of Ubuntu, perfect for inventors, technologists and the active and growing Ubuntu developer community, for cloud container hosts and smart, connected devices. It powers drones, robots, network switches, mobile base stations, industrial gateways, and IoT home hubs.

All developers and system builders need to know about the details of this new Ubuntu rendition and how to start using snappy Ubuntu Core 15.04 can be found on http://developer.ubuntu.com/snappy.

As is to be expected, with any release, there are some significant known bugs that users may run into with this release of Ubuntu 15.04. The ones we know about at this point (and some of the workarounds), are documented here so you don't need to spend time reporting these bugs again:

The release notes for the official flavours can be found at the following links:

If you want to help out with bugs, the Bug Squad is always looking for help.

If you would like to help shape Ubuntu, take a look at the list of ways you can participate at

You can find out more about Ubuntu on the Ubuntu website and Ubuntu wiki.