Anke Boersma has announced the release of Chakra GNU/Linux 2013.01, the fifth update of the project's "Claire" series featuring the new KDE 4.9.5 desktop: " The Chakra project team is proud to announce the fifth 'Claire' release, (a code name that follows the KDE SC 4.9 series). The day the 2012.12 release was announced as the final ISO image in the 'Claire' series, KDE announced there was going to be a KDE 4.9.5. That fact combined with KDE 4.10 release being pushed back 2 - 3 weeks and many base packages updated, the team decided to have one more 'Claire' release. Among updates in this release are KDE 4.9.5, OpenSSL and krb5 stack, sound group, KDE telepathy 0.5.2 to name a few. ISOlinux (the start-up of the live session) received a face-lift, plus booting into existing operating system and Memtest86+ options were added." See the complete release announcement for more information. Download: chakra-2013.01-Claire-x86_64.iso (1,636MB, MD5). 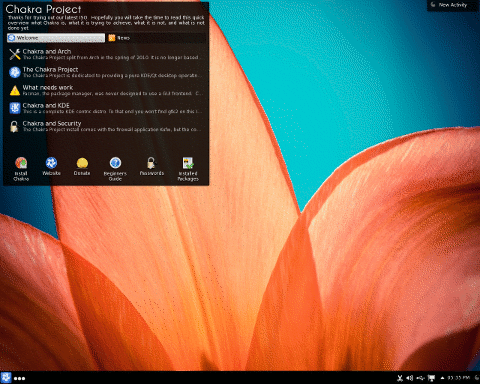