Together the Oracle, MySQL and Microsoft heavyweight DBs take the lion’s share of users, each reeling in users with their own distinct advantages.

Over the years, Oracle, MySQL and Microsoft have firmly secured their place at the top of the DB market. But the DB-engines ranking depicts a steady increase in popularity among newer alternative databases, with services like HBase, Cassandra and Teradata slowly gaining ground. 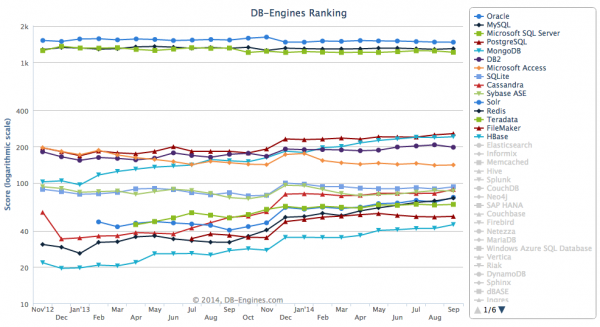 There are plenty more well-know DBs that didn’t make it into the top 10, for instance CouchDB (21), Neo4j (22) and Riak (30). Competition grows fierce further down the chain, with dozens more smaller and newer SQL and NoSQL databases for webmasters to choose from.

Check out the full ranking over on db-engines.com.