</span> Link: http://www.davincisdk.com Price: Free / Commercial Mobile platforms supported: iOS, Android We will start with a "unique" bird. Unlike other candidates Davinci SDK is IDE built around Eclipse made to help you create HTML5 web applications (mobile included). They have combined a wide variety of open source frameworks such as jQuery Mobile, KnockOut, Underscore, Handlebars, Backbone, etc. to aid you in HTML5 web app development. All in all this is an excellent idea, precisely what jQuery Mobile really needs, a good IDE. Combined with a large number of related frameworks, where I would like to single out Backbone and Underscore. It offers ready-made presets and an action editor with which HTML5 content may be created without a single line of coding. This kind of IDE and development will appeal to iOS developers. Don't forget that it supports native binary compiling for both iOS and Android OS.

This is a must have IDE for jQuery Mobile developers primarily it includes tight integration with Backbone, Knockout and Underscore. Phonegap is no more needed for native support. I can't stress this enough, Phonegap and jQuery Mobile combination is killing them, if possible stay away from Phonegap. If you are a jQuery Mobile developer intent on fast and easy development this is a tool for you. On the other hand, if you need speed steer clear from jQuery Mobile.

</span> Link: http://joapp.com/ Price: Free Mobile platforms supported: iOS, Android, Blackberry, Symbian, WebOS Jo is a lightweight HTML5 mobile app framework which provides UI widgets, a flexible event model, a wrapper for sound, and a light data layer. Minified it takes only 12 Kb, which is around 25x less then jQuery Mobile. It requires Phonegap as a native wrapper. I personally don't like Phonegap it but that's just me. It is optimized for Android (even version 1.6), iOS and WebOS usage, so, you guessed it, it runs fast.

From what I've seen so far this is a quick and fast framework. It is small but versatile, just like Swiss knife. I would strongly advise it if javascript OOP syntax or documentation is not a big problem for you. At the same time don't expect a large developer or community support. This is still a work in progress and I don't think it is ready for a large development projects, at least nothing very important. 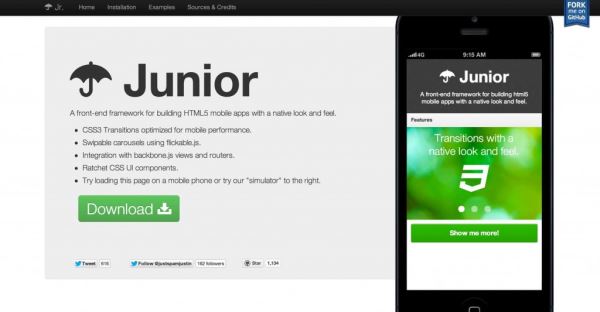 </span> Junior is another jQuery based HTML5 front-end framework for creating mobile apps that look and behave like native. Unlike Project M and Davinci SDK it is based on Zepto.js and has integration with Backbone. It uses Ratchet CSS for its UI components. For those of you who don't know Ratchet is used to prototype iPhone apps with simple HTML, CSS, and JS components. Inclusion of the Zepto.js and Retchet tells you that this framework also aims at been light and small. Link: http://justspamjustin.github.io/junior Price: Free Mobile platforms supported: iOS

I don't know what to think about this framework. Form one perspective it is small and fast. On the other hand it is formed form several distinct frameworks that may or may not work correctly together. From may experience this is a fast but lazy development. I am most disappointed with its UI, it simply don't have a native feeling, not to mention constant visual errors.

</span> Now this is something I like. The project M is an alternative version of jQuery Mobile, think of it as a pimped out version of jQuery Mobile. It provides developers with an MVC-based architecture for structured and convenient application development, something that original jQuery Mobile really needs. That is not all, you don't need Phonegap any more as a native app wrapper. Everything you need comes with a nifty tool called Espresso. It is a powerful build tool, that eases up the development process in many ways: It initializes the project, creates required components, provides a built-in web server, optimizes and packs the application, deploys it to e.g. an ftp server and builds native iOS/Android apps. Basically it's similar to the (un)holly combination of jQuery Mobile and Backbone and Phonegap, with everything positive that can provide, without most of their combined problems. Link: http://www.the-m-project.org/ Price: Free Mobile platforms supported: iOS, Android (Blackberry and Palm webOS - without native support)

I am in love. If you have enough time (and want to spend it with an improved version of jQuery Mobile) spend it learning this framework. It will took some time to learn it javascript approach, in the end it will worth your time. Its MVC support is much better then jQuery Mobile combined with Backbone. Anyone using this combination know how bad it can be sometimes. Only downside I can think of is don't expect Kendo UI / Sencha Touch native speed.
5. PhoneJS
</div>

</span> Link: http://phonejs.devexpress.com/ Price: Free / Commercial Mobile platforms supported: iOS, Android and Windows Phone PhoneJS is another jQuery based mobile framework that proves jQuery is more then capable to run in the background. It can support MVVM combined with Knockout (I usually don't like different framework combinations but int his case it works fine, mainly because it was created with Knockout in mind). It provides real native look and feel with themes created to mimic iOS, Android and Windows Mobile. They look same or even better (in case of the Android theme) then Kendo UI themes but that's just a subjective observation. Code syntax is very similar to jQuery Mobile and Kendo UI, HTML markup mixed with jQuery and Knockout.

Through time I fell in love with this framework. It should be viewed in the same light as Kendo UI. Both frameworks are great and fast, the use similar syntax, have similar MVVM support, almost same price. If you are willing to pay for mobile HTML 5 framework you should toss the coin and decide between this framework and Kendo UI.
Fuck*** awesome documentation and examples, I can' stress it enough.
6. Lungo
</div>

Link: http://lungo.tapquo.com Price: Free Mobile platforms supported: iOS, Android, Blackberry and WebOs Lungo is not a newcomer in HTML5 mobile fields. It was made few years ago at the time when other frameworks of that time were not powerful enough to take most of what HTML5 can offer. It structure is similar to jQuery Mobile where HTML is a driving point and CSS/javascript is used to improve it. It looks nice on every tested device, I am even grateful it's not trying to mimic native mobile look (iOS or Android) thus making it great for a heavy customization.


Lungo should be considered one of a better HTML5 mobile frameworks. It is easy to master and learn. Unfortunately it does not stand out among the competition. Thou I would highly recommend it for apps not trying to look native like, it is simply extremely easy to modify and customize.

Link: https://trigger.io/ Price: Free trial / Commercial Mobile platforms supported: iOS, Android Trigger.IO is another special case, mainly it is not a HTML5 framework. So why put it here? Because like Phonegap we can use it to create hybrid mobile applications. You can use any framework you want, create anything you need and almost instantly deploy it as a native app. It is simply a Phonegap on steroids. It provides much more then Phonegap .... for price. Here comes a bad part, it is not cheap ... by a long shot.


I must protest here, skip this part if you don't like subjective comments. Trigger.IO is great but man it cost damn too much. I really don't understand why would anyone pay that much for a glorified variation of Phonegap (and I hate Phonegap). It will not make any HTML5 mobile framework run faster, it will only give them a larger support for native functionalities. Each pricing range has a limited number of supported apps. If you take into the account that only small percent of app store applications are earning money that alone lowers the value of this system. Trigger.IO is a tax for lazy mobile developers. Objective comment would go like this: "Excellent (better) alternative to Phonegap .... just to pricy".