This project provides an efficient in-memory b-tree implementation in pure Swift, and several useful ordered collection types that use b-trees for their underlying storage.

All of these collections are structs and they implement the same copy-on-write value semantics as standard Swift collection types like Array and Dictionary . (In fact, copy-on-write works even better with these than standard collections; continue reading to find out why!)

The project includes a nicely formatted reference document generated from the documentation comments embedded in its source code.

B-trees are search trees that provide an ordered key-value store with excellent performance characteristics. In essence, each node maintains a sorted array of its own elements, and another array for its children. The tree is kept balanced by three constraints:

Compared to other popular search trees such asred-black trees or AVL trees , B-trees have huge nodes: nodes often contain hundreds (or even thousands) of key-value pairs and children.

This module implements a "vanilla" B-tree where every node contains full key-value pairs. (The other popular type is the B+-tree where only leaf nodes contain values; internal nodes contain only copies of keys. This often makes more sense on an external storage device with a fixed block size, but it is less useful for an in-memory implementation.)

Each node in the tree also maintains the count of all elements under it. This makes the tree an order statistic tree , where efficient positional lookup is possible.

The Swift standard library offers heavily optimized arrays and hash tables, but omits linked lists and tree-based data structures. This is a result of the Swift engineering team spending resources (effort, code size) on the abstractions that provide the biggest bang for the buck.

Indeed, the library lacks even a basicdouble-ended queue construct -- although Cocoa's Foundation framework does include one in NSArray .

However, some problems call for a wider variety of data structures.

In the past, linked lists and low-order search trees such as red-black trees were frequently employed; however, the performance of these constructs on modern hardware is greatly limited by their heavy use of pointers.

B-trees were originally invented in the 1970s as a data structure for slow external storage devices. As such, they are strongly optimized for locality of reference: they prefer to keep data in long contiguous buffers and they keep pointer derefencing to a minimum. (Dereferencing a pointer in a B-tree usually meant reading another block of data from the spinning hard drive, which is a glacially slow device compared to the main memory.)

Today's computers have multi-tiered memory architectures; they rely on caching to keep the system performant. This means that locality of reference has become a hugely important property for in-memory data structures, too.

Arrays are the epitome of reference locality, so the Swift stdlib's heavy emphasis on Array as the universal collection type is well justified.

For example, using a single array to hold a sorted list of items has quite horrible (quadratic) asymptotic complexity when there are many elements. However, up to a certain maximum size, a simple array is in fact the most efficient way to represent a sorted list. 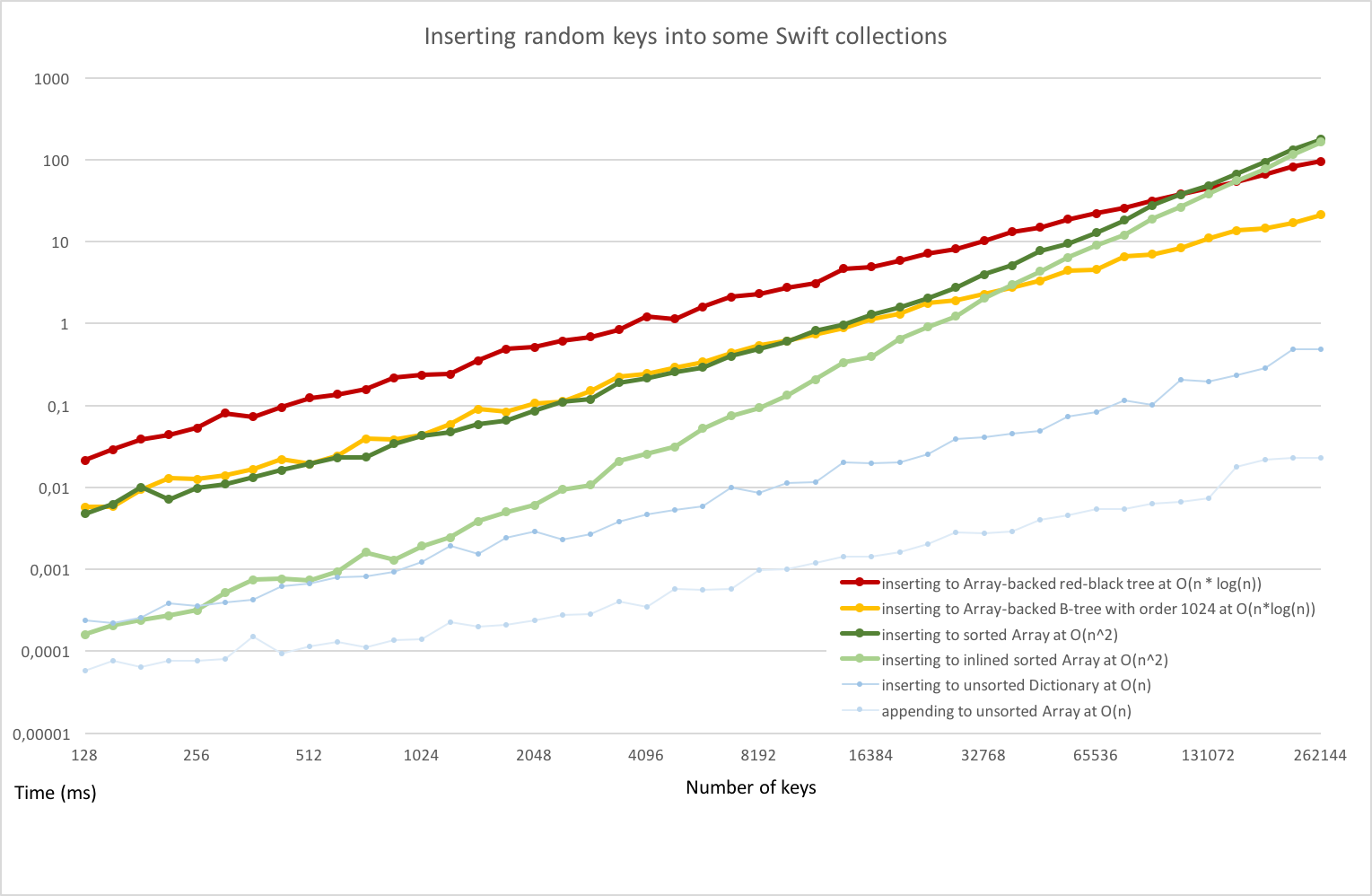 The benchmark above demonstrates this really well: insertion into a sorted array is O(n^2) when there are many items, but for many reasonably sized data sets, it is still much faster than a red-black tree with its fancypants O(n * log(n)) solution.

Near the beginning of the curve, up to about eighteen thousand items , a sorted array implementation imported from an external module is very consistently about 6-7 times faster than a red-black tree, with a slope that is indistinguishable from O(n * log(n)).

Even after it catches up to quadratic complexity, in this particular benchmark, it takes about a hundred thousand items for the sorted array to become slower than the red-black tree!

The exact cutoff point depends on the type/size of elements that you work with, and the capabilities of the compiler. This benchmark used tiny 8-byte integer elements, hence the huge number.

The benchmark is based on my own red-black tree implementation that uses a single flat array to store node data. A more typical implementation would store each node in a separately allocated object, so it would likely be even slower.

The chart above is a log-log plot which makes it easy to compare the polynomial exponents of the complexity curves of competing algorithms at a glance. The slope of a quadratic algorithm on a log-log chart (like insertion into a sorted array---the green curves) is twice of that of a linear algorithm (like appending n items to an unsorted array---light blue curve) or a quasilinear one (like inserting into a red-black tree, red curve).

Note that the big gap between collections imported from stdlib and those imported from external modules is caused by alimitation in the current Swift compiler/ABI: when this limitation is lifted, the gap will narrow considerably, which will reduce the element count at which you'll be able to reap the benefits of lower asymptotic complexity.

(This effect is already visible (albeit in reverse) on the benchmark for the "inlined" sorted array (light green), which is essentially the same code as the regular one (dark green) except it was implemented in the same module as the benchmarking loop, so the compiler has more options to optimize away witness tables and other levels of abstraction. That line starts curving up much sooner, at about 2000 items--imagine having a B-tree implementation that's equally fast! Or better, try it yourself and report your results. Producing benchmarks like this takes a lot of time and effort.) :-)

This remarkable result is due in large part to the vast number of (to a CPU, random-looking) memory references that are needed to operate on red-black trees. Their intricate ballet of tree rotations looks mighty impressive during a lecture on Data Structures, but to the delicate caches of your poor CPU, it looks more like a drunken elephant moshing at a thrash metal concert .

Meanwhile, the humble Array does the only thing it knows: sliding around long contiguous memory regions. It does this over and over, ad nauseum. It doesn't look impressive, but (up to a point) it fits well with how computers work.

So a small Array is perfect for maintaining a sorted list. But what if the list gets too long? The B-tree's answer is to simply cut the array in half, and to create a new index tree node on top to allow it to quickly find its way around this more complex list structure. These internal index nodes can also consist of arrays of elements and node references, creating a nice recursive data structure.

Because their fanout number is so high, B-trees are extremely shallow: for a B-tree with order 100 (which is actually rather on the low end), you can fit a billion items into a tree that's not more than five levels deep.

Once you accept that small arrays are fast, it is easy to see why B-trees work so well: unless it holds more elements than its order, a B-tree quite literally is just an Array . So it has the same performance behavior as an Array for a small number of elements, and when it grows larger it prevents a quadratic upswing by never allowing its arrays to get too large. The yellow curve on the benchmark above demonstrates this behavior well.

Consider that each node in a typical B-tree can hold about ten full levels of a red-black tree (or AVL trees or whatever binary tree you like). Looking up an item in a B-tree node still requires a binary search of the node array, but this search works on a contiguous memory region, while the conventional search tree is fiddling around with loading pointer values and dereferencing them.

So B-trees make perfect sense to use as an in-memory data structure.

Think about this, though: how many times do you need to work with a hundred thousand ordered items in a typical app? Or even twenty thousand? Or even just two thousand? The most interesting benefits of B-trees often occur at element counts over a hundred thousand. (However, B-trees are not much slower than arrays for low element counts (remember, they are arrays in that case), so it makes sense to use them when there's even a slight chance that the count will grow large.)

The data structures implemented by Array , Dictionary and Set are remarkably versatile: a huge class of problems is easily and efficiently solved by simple combinations of these abstractions. However, they aren't without drawbacks: you have probably run into cases when the standard collections exhibit suboptimal behavior:

These issues don't always matter. In fact, lots of interesting problems can be solved without running into any of them. When they do occur, the problems they cause are often insignificant. Even when they cause significant problems, it is usually straightforward to work around them by chosing a slightly different algorithm.

But sometimes you run into a case where the standard collection types are too slow, and it would be too painful to work around them.

B-Trees to the Rescue!

B-trees solve all of the issues above. (Of course, they come with a set of different issues of their own. Life is hard.)

Remark on Performance of Imported Generics

Current versions of the Swift compiler are unable to specialize generic types that are imported from external modules other than the standard library. (In fact, it is not entirely incorrect to say that the standard library works as if it was compiled each time anew as part of every Swift module rather than linked in as an opaque external binary.)

This limitation puts a considerable limit on the raw performance achievable by collection types imported from external modules, especially if they are parameterized with simple, extremely optimizable value types such as Int or even String . Relying on import will incur a 10-200x slowdown when your collection is holding these most basic value types. (The effect is much reduced for reference types, though.)

Without access to the full source code of the collection, the compiler is unable to optimize away abstractions like virtual dispatch tables, function calls and the rest of the fluff we've learned to pretty much don't care about for stuff inside a module. In cross-module generics, even retrieving a single Int will necessarily go through at least one lookup to a virtual table. This is because the code that implements the unspecialized generic also executes for type parameters that contain reference types, whose reference count needs to be maintained.

If raw performance is essential, currently the only way out of this pit is to put the collection's code inside your module. (Other than hacking stdlib to include these extra types, of course -- but that is a bad idea for a thousand obvious reasons.) However, having each module maintain its own set of collections would smell horrible, plus it would make it hard or impossible to transfer collection instances across module boundaries. Plus, if this strategy would be used across many modules, it would lead to a C++ templates-style (or worse) code explosion. A better (but still rather unsatisfactory) workaround is to compile the collection code with the single module that benefits most from specialization. The rest of the modules will still have access to it, if in a much slower way.

The Swift compiler team, true to their nature, have come up with a remarkably nice, pragmatic solution to this problem: a future compiler version will likely support a new attribute ( @_specialize ) that will allow library developers like myself to explicitly list a set of types for which their public generics would be specialized in the compiled package. This will allow us to have super fast, template-like generics for the handful of type combinations that really benefit from it, but still allows generics to be compiled just once and reused many times. (Thus, compilation will be super fast -- in stark contrast to C++ templates.)