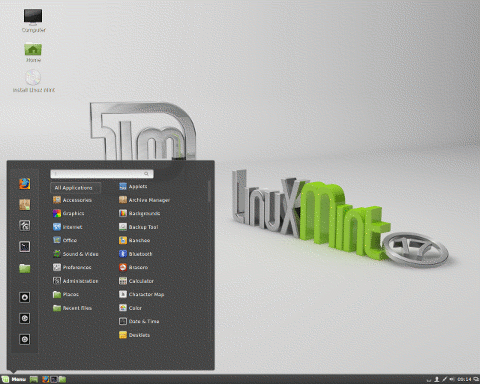 The Live session should log you in automatically. If it doesn't, or if you need to login manually, you can use the following credentials:

To guarantee compatibility with non-PAE processors, the 32-bit versions of Linux Mint Debian come with a 586 kernel by default. This kernel does not support SMP, and as a consequence is only able to detect one core and one CPU. If your CPU has multiple cores, or if you have more than one CPU, simply install the 686-PAE kernel and reboot your computer.

Type the following commands and reboot the computer:

Sometimes the MATE session fails to theme itself properly and shows up with ugly looking panels and icons. This is due to a race condition with MDM and it usually only happens in live mode. There are a number of workarounds for this. If it happens rarely, simply retheme the session by typing "mate-settings-daemon" and "killall caja". If the problem persists, you can add a "killall gnome-settings-daemon" and a "killall mate-settings-daemon" in the PreSession's default script for MDM. Alternatively you can switch to GDM3. Note that users reported similar issues between GDM and Gnome and even LightDM and Unity.

To find out more about this issue, refer to the following bug report.

The errors and warnings which appear in the boot sequence (especially the ones related to modprobe and mounts in the live boot sequence) are cosmetic bugs and can be ignored.

The LMDE ISOs and the live installer use a different structure than the ones used by other distributions. Please do not use Yumi or multiboot technologies with LMDE as it won't install properly.