SparkyLinux 3.4 “Annagerman” LXDE, Razor-Qt and Enlightenment 18 is out.

New iso images of SparkyLinux 3.4 provide a ton of updates, some changes and system improvements, such as:
- Linux kernel 3.14
- all packages upgraded from Debian testing repositories as of 2014/05/31
- LXDE 0.5.5-6
- Openbox 3.5.2-6
- Razor-Qt 0.5.2-4
- Enlightenment has been updated up to version E18 (0.18.2/0.18.5), see how to manually upgrade E17 to E18: http://sparkylinux.org/how-to-upgrade-sparky-e17-to-e18/
- support for installation on machines with EFI
- systemd is the default init system now, see how to change sysvinit to systemd:
http://sparkylinux.org/sparky-systemd/
- Sparky e18 is shipped with Sparky-Dark theme made by Agust with a wallpaper based on Sakasa artwork, the theme can be downloaded from sourceforge:
http://sourceforge.net/projects/sparkylinux/files/files/themes/A-18-Dark-Sparky.edj/download
- the repository list has been split:
* the main one features Debian repository only inside the file /etc/apt/sources.list
* all additional repositories have been moved to the directory /etc/apt/sources.list.d/
see: http://sparkylinux.org/sparky-repository/
- Sparky Center – our system control center for LXDE desktop has been rebuilt, added tabs for every option and upgraded up to version 0.2.1 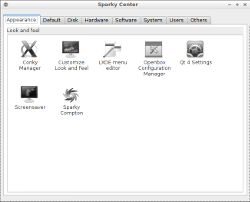 - Sparky APTus – our tool for updating, installing and removing packages has been updated up to version 0.2.0; it offers new functions now:
* removing Non-Free and Restricted packages which are pre-installed in the system
* installation of missing language packages
* every option is placed in a separated tab 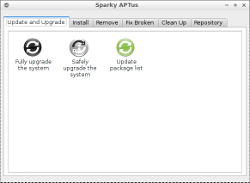 Sparky CLI Edition is also available (back).
It has been rebuilt and features now: core system, our old installer, mc, wicd-cli, elinks and wifi drivers.

We have made a couple of successful testing installations of Sparky in EFI mode in a virtual environment. We can’t promise that installation on a physical machine is fine.
We never tried this, because we don’t have any “normal” machine with EFI.

New iso images of SparkyLinux you can grab from our download page:
http://sparkyLinux.org/download

New iso images can be used to make new, fresh Sparky installation.
You don’t have to reinstall your system if you have Sparky installed on your machine.
Just make full system upgrade and follow the enclosed upgrading guides.