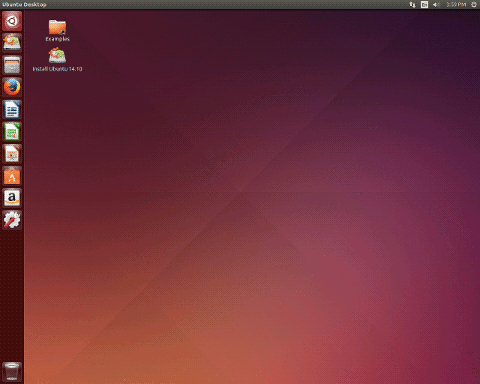 These release notes for Ubuntu 14.10 (Utopic Unicorn) provide an overview of the release and document the known issues with Ubuntu 14.10 and its flavors.

Ubuntu 14.10 will be supported for 9 months for Ubuntu Desktop, Ubuntu Server, Ubuntu Core, Kubuntu, Ubuntu Kylin along with all other flavours.

Find the links to release notes for official flavors here.

Images can be downloaded from a location near you.

To upgrade on a desktop system:

To upgrade on a server system:

Note that the server upgrade will use GNU screen and automatically re-attach in case of dropped connection problems.

There are no offline upgrade options for Ubuntu Desktop and Ubuntu Server. Please ensure you have network connectivity to one of the official mirrors or to a locally accessible mirror and follow the instructions above.

Please test and report any bugs you find:

As with every new release, packages--applications and software of all kinds--are being updated at a rapid pace. Many of these packages came from an automatic sync from Debian's unstable branch; others have been explicitly pulled in for Ubuntu 14.10.

The Ubuntu 14.10 release delivers a v3.16 based kernel. This brings a significant number of bug fixes and new hardware support including expanded architecture support for Power 8 and arm64 platforms. It also includes support for Intel Cherryview, Haswell, Broadwell and Merrifield systems, and initial support for Nvidia GK20A and GK110B GPU’s. There is improved graphics performance on many Nvidia, Intel and ATI Radeon devices and also audio improvements with support for the Radeon .264 video encoder. Expanded platform support is enabled via support for 64 bit EFI boot on 32 bit EFI BIOS. This release also brings performance improvements in suspend/resume times.

For developers we see significant improvements in tracing and debugging with new triggers for kernel trace points, and expansion of uprobe support. This release also brings a new experimental deadline CPU scheduler.

On the security front we see full Kernel Address Space Layout Randomisation applied to the kernel and its modules, plus the closure of a number of information leaks in /proc. We also see additional support for cryptographic devices.

AppArmor added support for fine-grained mediation of unix(7) abstract and anonymous sockets and also added various policy updates and bug fixes. AppArmor policy has been adjusted for packages that ship it to work with these changes, but local policy may need to be adjusted unix rules. See man 5 apparmor.d for details.

Oxide has been updated to use the latest Chromium Content API and includes numerous bug fixes and features to better support webbrowser-app, webapps and apps using UbuntuWebViews. Oxide is a webview based on Chromium to deliver web content. Oxide allows us to better support 3rd party developers and applications within the Ubuntu archive by providing a fast, secure and up to date webengine library for the duration of this release. While other web content libraries such as those based on webkit are available, their maintenance will be limited to new upstream minor version releases only, and application developers are encouraged to use Oxide instead.

The general theme for 14.10 on the desktop is one of bug fixes and incremental quality improvements.

Unity has had many bugs fixed and features improved support for High-DPI displays.

This new tool allows developers to quickly and easily setup a variety of development environments on their Ubuntu Desktop. More information here: http://blog.didrocks.fr/post/Ubuntu-loves-Developers

Ubuntu 14.10 includes the OpenStack 2014.2 (Juno) release of the following projects in Ubuntu main:

Make sure you read the OpenStack Charm Release Notes for more information.

Kvm is now supported on the ppc64le architecture.

Cgmanager now has a new compiled client tool, and supports new methods including Prune, ListTasksRecursive, and ListControllers. It now supports the features needed for systemd-shim to properly close sessions.

This includes container checkpoint and restart as a tech preview.

Cloud-init 0.7.6 brings several bug fixes along with support for booting ubuntu with systemd. Also featured is improvements when using vendor-data on OpenStack.

bcache support is now included as a technology preview, enabled in the kernel and via the userspace package bcache-tools, but without installer support. We highly recommend that you take full system backups before experimenting with it. It has been enabled with a focus on server use cases. Some desktop use cases should also work, but we have observed some issues when attempting to combine bcache use with LVM and md.

Juju, the service orchestration tool for Ubuntu, has been updated to the latest current stable release, 1.20.10. See the upstream release notes for full details of all new features and improvements in this release.

Docker 1.2 is released in Utopic. For the absolute latest upstream version of Docker, please follow the instructions here https://docs.docker.com/installation/ubuntulinux/ titled "If you'd like to try the latest version of Docker"

MAAS has been updated to the latest current beta release, 1.7-beta8. Many new features have been added, and lots of bugfixes too. Full release notes will be available shortly.