Matplotlib is the grandfather of python visualization packages. It is extremely powerful but with that power comes complexity. You can typically do anything you need using matplotlib but it is not always so easy to figure out. I am not going to walk through a pure Matplotlib example because many of the tools (especially Pandas and Seaborn) are thin wrappers over matplotlib. If you would like to read more about it, I went through several examples in my simple graphing article.

My biggest gripe with Matplotlib is that it just takes too much work to get reasonable looking graphs. In playing around with some of these examples, I found it easier to get nice looking visualization without a lot of code. For one small example of the verbose nature of matplotlib, look at the faceting example on this ggplot post.

One quick note on my methodology for this article. I am sure that as soon as people start reading this, they will point out better ways to use these tools. My goal was not to create the exact same graph in each example. I wanted to visualize the data in roughly the same way in each example with roughly the same amount of time researching the solution.

As I went through this process, the biggest challenge I had was formatting the x and y axes and making the data look reasonable given some of the large labels. It also took some time to figure out how each tool wanted the data formatted. Once I figured those parts out, the rest was relatively simple.

Another point to consider is that a bar plot is probably one of the simpler types of graphs to make. These tools allow you to do many more types of plots with data. My examples focus more on the ease of formatting than innovative visualization examples. Also, because of the labels, some of the plots take up a lot of space so I’ve taken the liberty of cutting them off - just to keep the article length manageable. Finally, I have resized images so any blurriness is an issue of scaling and not a reflection on the actual output quality.

Finally, I’m approaching this from the mindset of trying to use another tool in lieu of Excel. I think my examples are more illustrative of displaying in a report, presentation, email or on a static web page. If you are evaluating tools for real time visualization of data or sharing via some other mechanism; then some of these tools offer a lot more capability that I don’t go into.

The previous article describes the data we will be working with. I took the scraping example one layer deeper and determined the detail spending items in each category. This data set includes 125 line items but I have chosen to focus only on showing the top 10 to keep it a little simpler. You can find the full data set here.

I am using a pandas DataFrame as the starting point for all the various plots. Fortunately, pandas does supply a built in plotting capability for us which is a layer over matplotlib. I will use that as the baseline.

First, import our modules and read in the data into a budget DataFrame. We also want to sort the data and limit it to the top 10 items.

We will use the same budget lines for all of our examples. Here is what the top 5 items look like:

Now, setup our display to use nicer defaults and create a bar plot:

This does all of the heavy lifting of creating the plot using the "detail" column as well as displaying the title and removing the legend.

Here is the additional code needed to save the image as a png.

Here is what it looks like (truncated to keep the article length manageable): 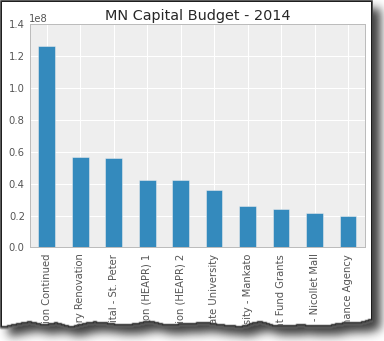 The basics look pretty nice. Ideally, I’d like to do some more formatting of the y-axis but that requires jumping into some matplotlib gymnastics. This is a perfectly serviceable visualization but it’s not possible to do a whole lot more customization purely through pandas.

Seaborn is a visualization library based on matplotlib. It seeks to make default data visualizations much more visually appealing. It also has the goal of making more complicated plots simpler to create. It does integrate well with pandas.

My example does not allow seaborn to significantly differentiate itself. One thing I like about seaborn is the various built in styles which allows you to quickly change the color palettes to look a little nicer. Otherwise, seaborn does not do a lot for us with this simple chart.

Standard imports and read in the data:

This section of code sets the order, and styles the plot and bar chart colors: 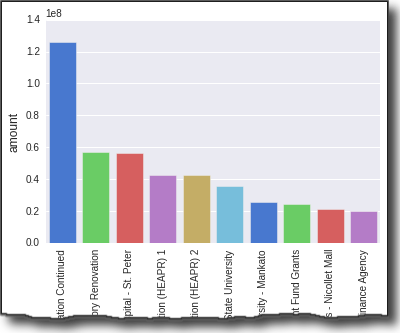 As you can see, I had to use matplotlib to rotate the x axis titles so I could actually read them. Visually, the display looks nice. Ideally, I’d like to format the ticks on the y-axis but I couldn’t figure out how to do that without usingplt.yticksfrom matplotlib.

I have not used ggplot in R so there was a bit of a learning curve. However, I can start to see the appeal of ggplot. The library is being actively developed and I hope it continues to grow and mature because I think it could be a really powerful option. I did have a few times in my learning where I struggled to figure out how to do something. After looking at the code and doing a little googling, I was able to figure most of it out.

Go ahead and import and read our data:

Now we construct our plot by chaining together a several ggplot commands:

This seems a little strange - especially usingprint pto display the graph. However, I found it relatively straightforward to figure out.

The coolest feature I found wasscale_y_continouswhich makes the labels come through a lot nicer.

If you want to save the image, it’s easy withggsave:

Here is the final image. I know it’s a lot of grey scale. I could color it but did not take the time to do so. 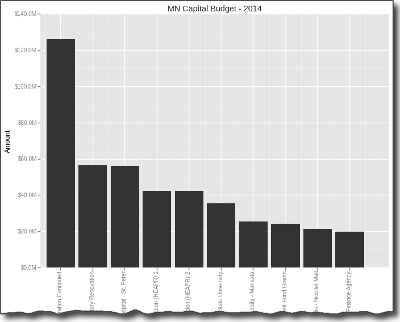 Bokeh is different from the prior 3 libraries in that it does not depend on matplotlib and is geared toward generating visualizations in modern web browsers. It is meant to make interactive web visualizations so my example is fairly simplistic.

Import and read in the data:

One different aspect of bokeh is that I need to explicitly list out the values we want to plot.

Now we can plot it. This code causes the browser to display the HTML page containing the graph. I was able to save a png copy in case I wanted to use it for other display purposes.

Here is the png image: 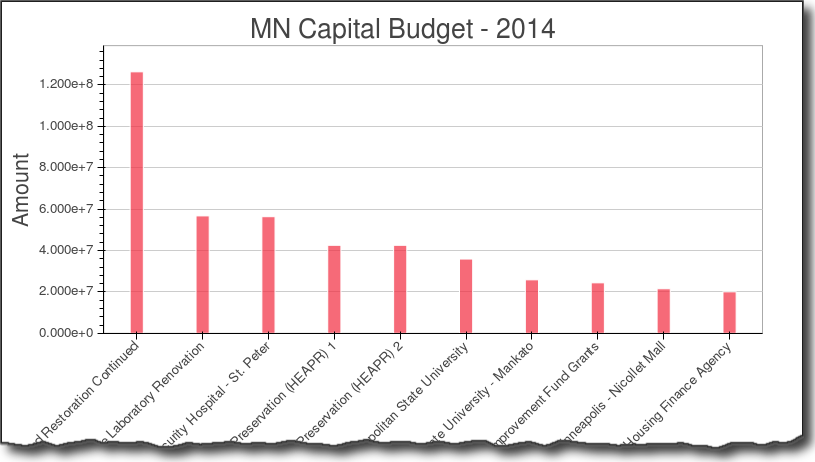 As you can see the graph is nice and clean. I did not find a simple way to more easily format the y-axis. Bokeh has a lot more functionality but I did not dive into in this example.

Pygal is used for creating svg charts. If the proper dependencies are installed, you can also save a file as a png. The svg files are pretty useful for easily making interactive charts. I also found that it was pretty easy to create unique looking and visually appealing charts with this tool.

Do our imports and read in the data:

We need to create the type of chart and set some basic settings:

One interesting note ishuman_readablewhich does a nice job of formatting the data so that it mostly "just works."

Now we need to add the data to our chart. This is where the integration with pandas is not very tight but I found it straightforward to do for this small data set. Performance might be an issue when there are lots of rows.

Now render the file as an svg and png file: 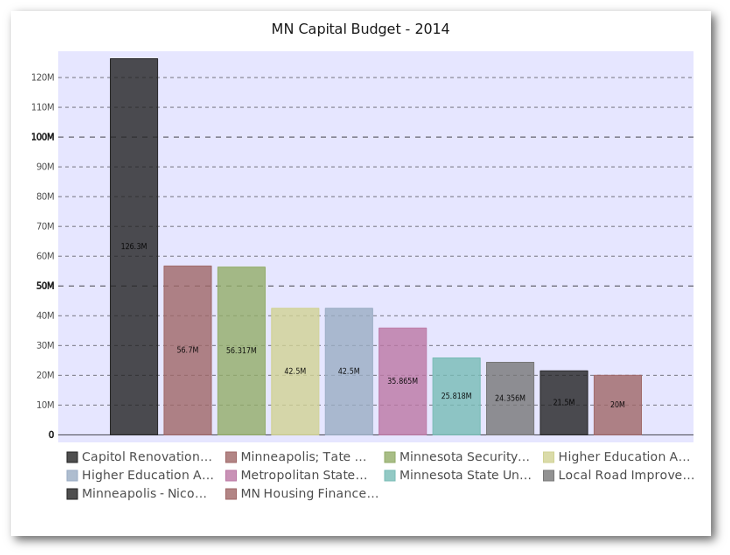 I think the svg presentation is really nice and I like how the resulting graph has a unique, visually pleasing style. I also found it relatively easy to figure out what I could and could not do with the tool. I encourage you to download the svg file and look at it in your browser to see the interactive nature of the graph.

Plot.ly is differentiated by being an online tool for doing analytics and visualization. It has robust API’s and includes one for python. Browsing the website, you’ll see that there are lots of very rich, interactive graphs. Thanks to the excellent documentation, creating the bar chart was relatively simple.

You’ll need to follow the docs to get your API key set up. Once you do, it seems to all work pretty seamlessly. The one caveat is that everything you are doing is posted on the web so make sure you are ok with it. There is an option to keep plots private so you do have control over that aspect.

Plotly integrates pretty seamlessly with pandas. I also will give a shout out to them for being very responsive to an email question I had. I appreciate their timely reply.

Setup my imports and read in the data

Setup the data and chart type for plotly.

I also decided to add some additional layout information.

Finally, plot the data. This will open up a browser and take you to your finished plot. I originally didn’t see this but you can save a local copy as well, usingpy.image.save_as. This is a really cool feature. You get the interactivity of a rich web-based report as well as the ability to save a local copy to for embedding in your documents.

Check out the full-interactive version too. You can see a lot more robust examples on their site.

The out of the box plot is very appealing and highly interactive. Because of the docs and the python api, getting up and running was pretty easy and I liked the final product.