8年前
jQuery Scroll Path is a plugin that lets you define your own custom scroll path. The plugin uses canvas flavored syntax for drawing paths, using the methods moveTo, lineTo and arc. To help with getting the path right, a canvas overlay with the path can be enabled when initating the plugin.

Scrolling can be done with the mousewheel, up/down arrow keys and spacebar. The spacebar scrolls faster than the arrow keys, and holding shift while pressing space will scroll backwards. A custom scrollbar is also included, which allows click and drag scrolling. The scrollbar is enabled by default.

jQuery Scroll Path also allows rotating the entire page, using CSS transforms. This can be done either along a path, or around the current position. In browsers without CSS transform support, all rotations are ignored, but paths are still followed. This means the plugin works with graceful degradation in all browsers. 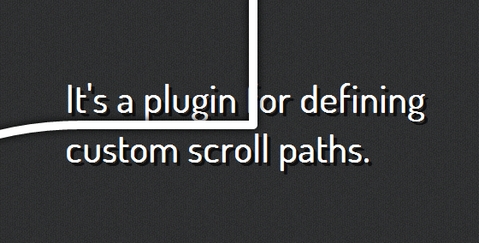 jQuery Scroll Path is a plugin that lets you define your own custom scroll path. The plugin uses ...